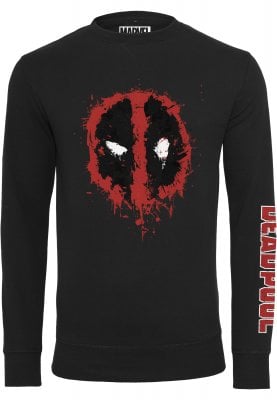 Wade Wilson aka Deadpool is an old mercenary who gets insulted to a human expriment hoping to cure his cancer. During the very painful expriment, Wade becomes a mutant that develops super powers.

In the comics, Deadpool appeared for the first time in 1991 and in movies, he saw him already in X-Men Origins: Wolverine in 2009.

Seven years later (2016), Deadpool got his first own movie.

Here is the humorous superhero in a splatter on the chest of a black sweatshirt. On the arm you will find Deadpool's log.