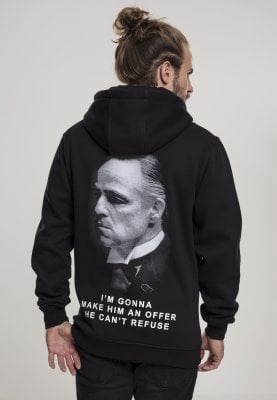 A black hooded sweater with a kangaroo pocket on the stomach and a drawstring in the hood. The hoodie has cuffs at the bottom and at the end of the arm.

The hoodie has a small print on one side of the chest, a red rose symbolizing that the Godfather always had a red rose inserted into his black jacket.

On the back is a large print in black-white-gray scale, the motif is the Godfather's face and at the bottom of the back end is the text "I´M GONNA MAKE HIM AN OFFER HE CAN´T REFUSE".

The Godfather is an Oscar-winning American gangster film that premiered in the United States on March 15, 1972. The film is ranked as one of the world's best films.

The film is about a boy, Vito, who survived when his entire family was murdered. He fled to New York and took the surname after his birthplace Corleone.