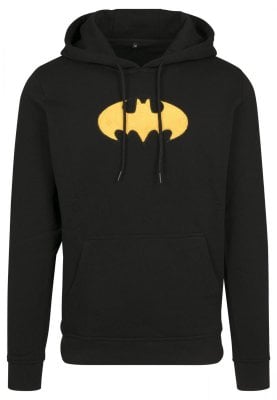 A really comfortable hoodie with a bold version of Batman's logo in brushed fleece. This gives the yellow in the logo a cheeky effect and soft surface.

Batman is a serial hero from the publisher DC Comics and together with Superman he is the publisher's largest. Batman was created the year after the Superman in 1939.

What sets Batman apart from many other heroes is that he has no super powers. He is an ordinary person. Batman's real identity is the genius and billionaire Bruce Wayne, who after a murder of his parents decides to devote his life to fighting crime.

The city he defends is called Gotham City and the city should be happy that they have Batman when the city is hit by super villains like Penguin, Joker, Harley Quinn, Catwomen, Two-Face, Poison Ivy with many more.