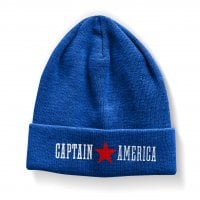 Marvel Comics superhero Captain Ameica has is her own hat with the superhero's name along with the red star Captain America wears on her shield.

Captain America is just like the name suggests a symbol of the United States and the cartoon character was picked up during World War II where he even began his life under the name of Steve Rodgers.

Steve Rodgers was a weak and sick guy who was very desperate to fight in the war against the Nazis. Unfortunately, he was considered too weak and ill to be fit for service.

Steve is then admitted to an expriment. An expriment whose purpose is to create super soldiers. Steve Rodgers is a successful result of the experiment and he develops super powers that make him extremely fast, strong and durable.

Steve Rodgers will, after the experiment, become known by the name we all know best ... Captain America.